Voice Assistants — the Future is Here

With each year, it is becoming more difficult to tell life from science fiction

Adding voice control to devices was a true technological quantum leap, as it immediately expanded the options available to the device user. At the first glance, it may seem mere fun, entertainment, and an unnecessary fad, although what we see is just the tip of the iceberg. Voice control technology rests on a solid foundation of language processing, speech recognition, artificial intelligence, and other technologies belonging to a very academic field of computational linguistics. Just imagine the amount of thinking power it took to make a computer understand natural human speech. And voice control should by no means be regarded as entertainment only. It is, in the first place, convenient, flexible, usable, and secure.

We have already looked at the way Amazon Echo and its virtual assistant, Alexa, can help you with automating your home. Your voice becomes the extension of your hands and fingers reaching where you cannot reach. Amazon Alexa can be your secretary and your housekeeper, a companion for you, and a nanny for your children.

Through Amazon Echo, you can use Alexa to voice-control all sorts of smart devices connected either via a hub or directly. Many brands producing home automation devices include compatibility with Alexa in their new models to provide easy integration into the existing Alexa-based smart home networks.

However, Alexa is by far not alone in the market of voice assistants which can also control your home. Let’s look at other options to see their advantages and weak points.

Siri, the Voice of iOS

Most Apple supporters know Siri quite well and love holding conversations with her and asking her to perform certain tasks. With Apple HomeKit, Siri becomes your virtual assistant not only in your business but also in your housekeeping. Currently, more than 50 home automation brands are offering HomeKit-compatible devices, so it is quite easy to set up a smart home system with an iOS device functioning as a hub and Siri at your command to orchestrate all the flows and processes. You can either talk to Siri by pushing the button on your smartphone or if you prefer hands-free operation, program Siri to answer the wake-up word. Just say “Hey Siri” — and there she is, ready to help. 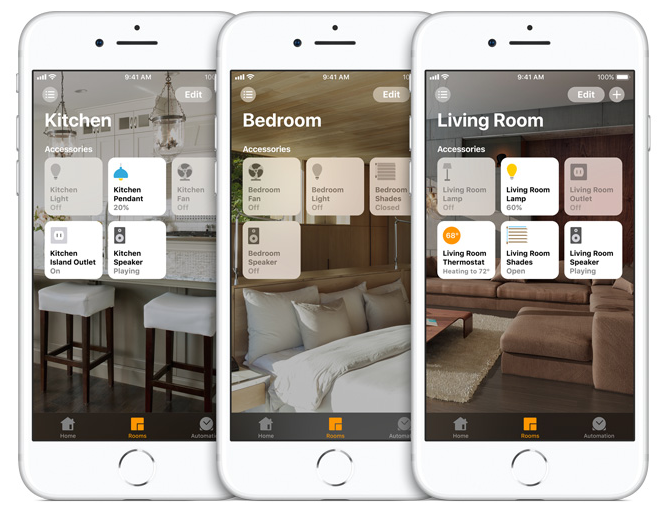 With Apple HomeKit, you can group your home automation devices by rooms or locations and control them as a group with a single command. If you say: “Siri, turn on the lights in the living room”, she will understand. Alternatively, you can set up the so-called scenes — entire scenarios to be followed in certain situations. For example, program an “I’m home” scene, and say “Siri, I’m home” when turning to your driveway. Siri will hear and start the sequence by disabling the security system, unlocking your garage door, switching on the garage lights, at the same adjusting the thermostat in the house to increase heating, and switching on the lights on your porch. Isn’t it cool — just a couple of words, and things start working around you as if by magic?

So, if you are an iOS person and have set your sights on automating your home, look for devices bearing the “Works with Apple HomeKit” symbol. As I said already, more than 50 brands support the HomeKit, so your options are quite broad. Philips Hue lights, Honeywell thermostats, Fibaro sensors, and August smart locks — all of them work with Apple HomeKit and can be set up to obey Siri, your efficient housekeeper, and companion.

If you are a faithful adept of Microsoft Windows, you must have heard the voice of Cortana, the lady hiding behind Windows 10 (by the way, have you ever wondered why all voice assistants are female? I have, and look what I found — most users, both men, and women find female voices “warmer”, which creates a positive user experience. Hence, our virtual assistants are all ladies. However, recently, Siri can speak in a man’s voice, too).

In the home automation sector, Microsoft seems to lag, however, it also has something to offer here. Since 2017, its Cortana Notebook had the Connected Home option allowing it to control smart devices. Unfortunately, the list of available device brands is rather short as of now — Microsoft Connected Home supports Wink, Insteon, Nest, SmartThings, and Philips Hue only. 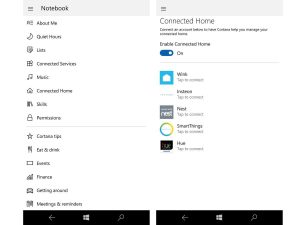 With Connected Home enabled, you can sign in to your account in any of the five available home automation services and manage your smart home via Cortana. Until recently, Cortana and Connected Home were available in Windows 10-based PCs and laptops as well as in Windows phones, however, in October 2017, Harman Kardon rolled out its Invoke speaker powered by Cortana. So, now you can talk to Cortana via the speaker and tell her what to do. Just wake her up with “Hey, Cortana” — and say what has to be done. Like other voice assistants, Cortana can also control groups of devices, just make sure you give them similar names. For example, if you name devices “Bedroom light 1” and “Bedroom light 2”, and ask Cortana to “turn on the bedroom lights”, she will turn on both of them. 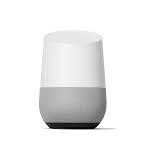 Google Assistant, the voice of Google Home, although sounding like a woman, has no name. However, this may be just a minor drawback compared to the possibilities Google Assistant has. To begin with, Google Assistant sits on top of the powerful Google search engine which it draws upon when we ask it for information. So, when you need to search for something via Google Home, you are searching directly in Google.

Recently, Google Home can support multiple Google accounts and recognize their owner’s voices, so the entire family can use the same Google Home device under their accounts.

To wake it up, just say the usual “OK, Google” phrase. Besides, this is how you need to begin each command you send to your Google Home, otherwise, it will not respond. After you have established contact, Google Home is all yours.

In the context of home automation, the possibilities of Google Home are rather vast. Google used to own Nest Labs, so, naturally, Google Home is perfectly compatible with Nest home automation devices, particularly, Nest thermostats. It also shows the same reliable performance with Philips Hue smart lights and August smart locks, as well as with several other smart devices. Just download the Google Home app, connect the available devices — and off you go. You can use simple phrases to control your smart home, however, make sure you always begin with “OK, Google” — “OK, Google, turn on the bedroom lights”, “OK, Google, make it warmer”.

There is a minor drawback here — Google Home cannot recognize two actions within one command, for example, you cannot say “OK, Google, turn on the lights and make it cooler here”. You will have to give two separate commands.

Home automation is no longer a wonder and a game for young geeks. You can see home automation systems in large mansions and small apartments, there are smart homes for big families, young couples, and senior citizens.

Voice control is about to become similarly common, as more people recognize the convenience of controlling gadgets without any physical contact and keeping their hands free. The industry also sees the trend, and we are going to see more amazing voice-controlled devices very shortly.